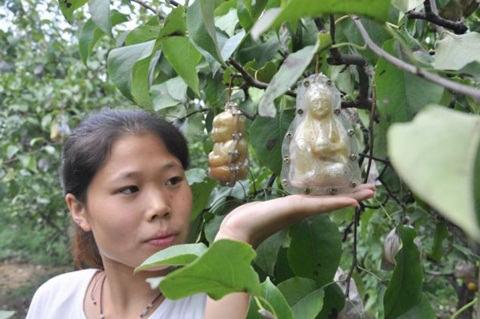 **MANDATORY BY LINE** PIC FROM IMAGINE CHINA / CATERS NEWS – PICTURED A woman demonstrates a baby-shaped pear in Handan city, north Chinas Hebei province, 6 September 2012. Hao Xianzhang is a farmer in northern Chinese province of Hebei. He started to grow baby-shaped pears in 2003. After years of effort, he succeeded in creating the mini marvels and planned to take the fruits of his labour to the UK and Europe. Recently, Hao put his unique pears into wine bottles, which attracted a lot of customers to purchase. **FOR USE / SALE IN THE UK**